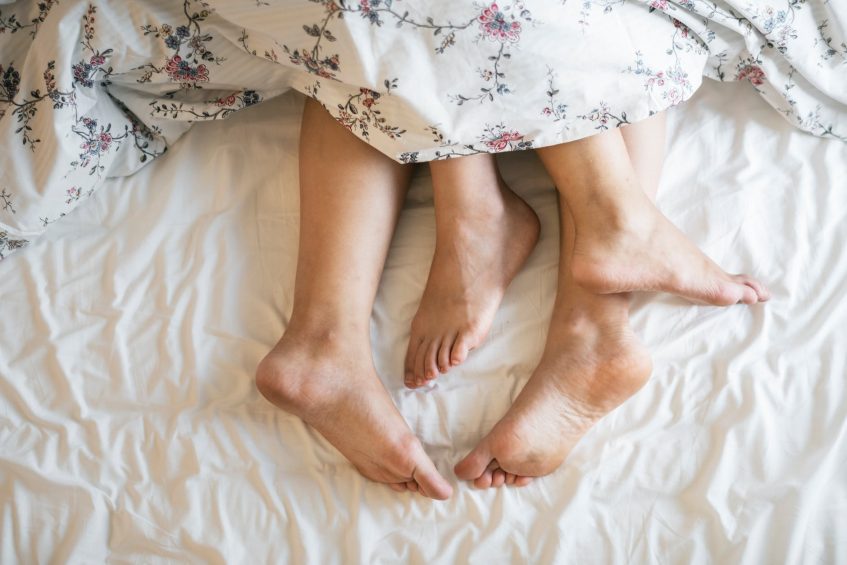 How to Act When You’re Caught Having Sex in College

There are almost limitless scenarios to choose from concerning how to act when you’re caught having sex in college.

In order to make this particular article more useful, it’s based on this one: freshmen year roommate walks in on your legendary sexcapade when they should have been at class.

How should you react? What’s the proper course of action? What kinds of things should be considered? With forethought and a little bit of planning for the worst, it doesn’t have to be an embarrassing tragedy.

Whenever you have sex in a dorm room be prepared for people to barge in at any time. Have something handy that you can use to shield yourself and your partner from the masses.

No matter how wild it gets, know that you could need a blanket at any moment.

The opportunity may not present itself too many other times in life. However, if this hasn’t been discussed beforehand it could easily scare the crap out of your unsuspecting roomie.

Remember, Sex Isn’t That Big of a Deal

On any given 24 hour period in any typical college dorm throughout America, how many students are getting freaky-deeky? Sex really isn’t that big of a deal. There’s not much reason to go off the hinges and feel embarrassed. What’s wrong with getting some?

I mean think about it, most college students who aren’t are wishing they were so don’t be too hard on anyone.

Don’t Get Angry with Your Roommate

If you didn’t leave some signal or note on the door then how is it their fault that they walked in on you at the exact wrong moment just as you were about to climax? They were clueless. Now, if the sex is overtly loud and everyone else in the dorm knew what was going on but people still barge in and ruin things, that’s another story.

Regardless, there’s no reason to get angry because there really hasn’t been any harm done.

Think about the Other Person’s Feelings Too!

You’re not the only one in an awkward situation. Remember that the person you’re getting it on with may have reservations. If they want to hide and are taking the situation seriously, you need to respect that because they might not think it’s a joke at all.

Do your best to get your roommate out of the room and give the other person time and space to collect their thoughts/things and split out the window if need be.

Talk with Your Roommate

Maybe now would be a good time to set down some ground rules. Signs might not be a good idea because they invite pranks and distractions from passersby in the halls. Perhaps you could develop a special knock or something that will let both of you know when the room is being occupied for special reasons.

Once everything is out in the open, it will be easier just to let them know you plan on getting some and they’ll avoid the room for an hour.

What If Your Roomy is into the Other Person?

All is fair in love and war, especially in a transitional place like college. However, you have to share a room with this other person and this could lead to hardcore drama. Try at all costs to avoid a huge loud altercation because that’s going to attract way too much attention. Can they be reasoned with? Can it be talked about later?

If you have to just get dressed as quickly and calmly as possible and exit the situation until your roomy has time to think it over.

If all else fails you can get a different roommate or the college will likely have a trained mediator come in and try to fix the problem between the both of you. The point is, the drama is not worth turning into a huge time-sink.

Don’t Make a Spectacle of the Experience

As a rule of thumb it’s best to exercise discretion afterwards. Don’t go around talking about it. Don’t try to be the coolest freshmen in town. Don’t make it a topic of conversation for months on end. It’s bad form and once word gets around that you’re a talker, no one else is going to want to get busy with you in your dorm room.

So, let’s hear it, have you been caught in the act in college? If so, how did you react? We’re all dying to listen to the story and perhaps employ your methods if the need arises.