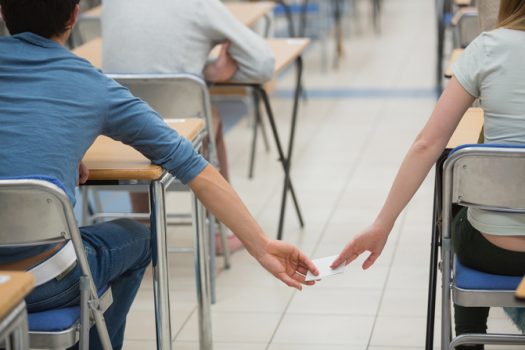 How to Tell If a Student Is Cheating on Exam

There’s a 95% chance that the person reading this right now is a student wondering how professors detect cheating. Let’s talk frankly, most students cheat at one point or another in college. Anonymous studies and surveys from universities far and wide say as much. This post isn’t about morality and it’s not supposed to be an ethics lesson. We’re going to talk about the 10 little things to keep in mind if you find yourself up against a wall and need to take drastic measures to ensure you success (it happens to the best of us!).

Unless you set the precedent early, don’t try to be the first person done with a test. Now, if you studied your ass off and just know the content like a boss, okay fine get it done with asap.

Otherwise, try to either hand it in once most other people in class do or take up the entire time. There’s a fair amount of benefits to being the last person to hand in a test once you think about it.

These days professors that deal with writing can easily have a subscription to services like CopyScape which will allow them to copy/paste your writing into a plagiarism checker that searches the entire web…If you want to copy someone, fine. Just make sure that you personalize the data and write it in such a way that it would pass CopyScape with at least 90% original content. Spinning is one thing. Outright copying is another.

You might want to look around the class room. These days surveillance technology comes cheaply. Universities can get tons of the stuff at really low rates. Are there any little cameras in the classroom that you can’t see?

Don’t try and write things on your hands, arms, the underside of your cap, etc. Professors that suspect something will typically greet students in person, or hand them out directly to students to give them a quick shakedown. And, they’ll have already check desks beforehand and washed away anything they find written on them. If they don’t, the janitorial services likely will.

You may not think so, but in the smaller to moderate-sized classes professors get an idea of your behavior. Make sure it matches up with your grades. Like, if you barely show up to class, are always day-dreaming instead of writing notes or never look like you have an idea what’s going on and then get 98% on the exam…they might be inclined to suspect something.

Dude, seriously? Don’t freaking whisper with people during class and if someone whispers to you shoosh them without turning and looking at them. Professors can pick up whispering at 100 yards downwind so this isn’t a wise option. Some might just give you a stern look or stare in your direction for a few minutes while others have zero tolerance and will yank your exam away immediately.

7. Pleading & Desperation and then Excellence

Right so when the surprise exam was announced you nearly have a panic attack and fled from class screaming. Then you get a high score. A good enough reason to suspect something.

Unless you’re a gifted actor and can pull off one of the most epic potty dances of all time for the entire class to gawk at, avoid this method. Most professors won’t allow it and if they do and you end up being gone too long and acing the exam it will throw you into the shadows of doubt.

This is pretty straightforward. So you’ve been getting consistent C’s and then magically out of nowhere you get 100% while everyone else averaged 75%. Hmm, does that seem suspect to you? Make sure you know whether a test is being graded on a scale or not, and NEVER be afraid to put a professor on the spot and ask, “What have your students typically averaged on this test?” If it’s one of those crazy impossible tests then you getting high abnormal and irregular scores will come off as unwarranted.

Weird, you and your best class buddy who sits directly in front of you got the same exact score. While on the one hand this could simply mean you study together outside class, the professor will probably think something’s up. They tend to pay attention to these things because they take their jobs in society seriously. As should you.

Did we miss anything? Obviously there’s a whole lot more when it comes to technology. Leave a comment and let us know what kinds of thing professors are doing these days to weed out any cheating.